So I had another Z22 block built, but I might have screwed up.
The first one I had built was made out of a late Z22E with EFI block from a car, and it turned out great, everything looked normal when I put it together.
Today I went and picked up the second one that I am in the process of building and the pistons on this one don't come all the way up to the deck of the block like the first one I had built did, they come up about 3mm short, I am a little worried now about my compression ratio.
So I started looking into why the two block builds would be different and I went to the Jason Grey info on Ratsun and found this below, what may have happened is that the first block I built was a late Z22E with the 149.5mm rods, and this block was a Z22S with the 145.9mm rods, so this seems to me to be a problem, or my first block I built doesn't have 8.9 to 1 CR I thought it had, it is likely higher, maybe a lot higher.

Does anyone know what the compression ratio will be on this block with a closed chamber head? 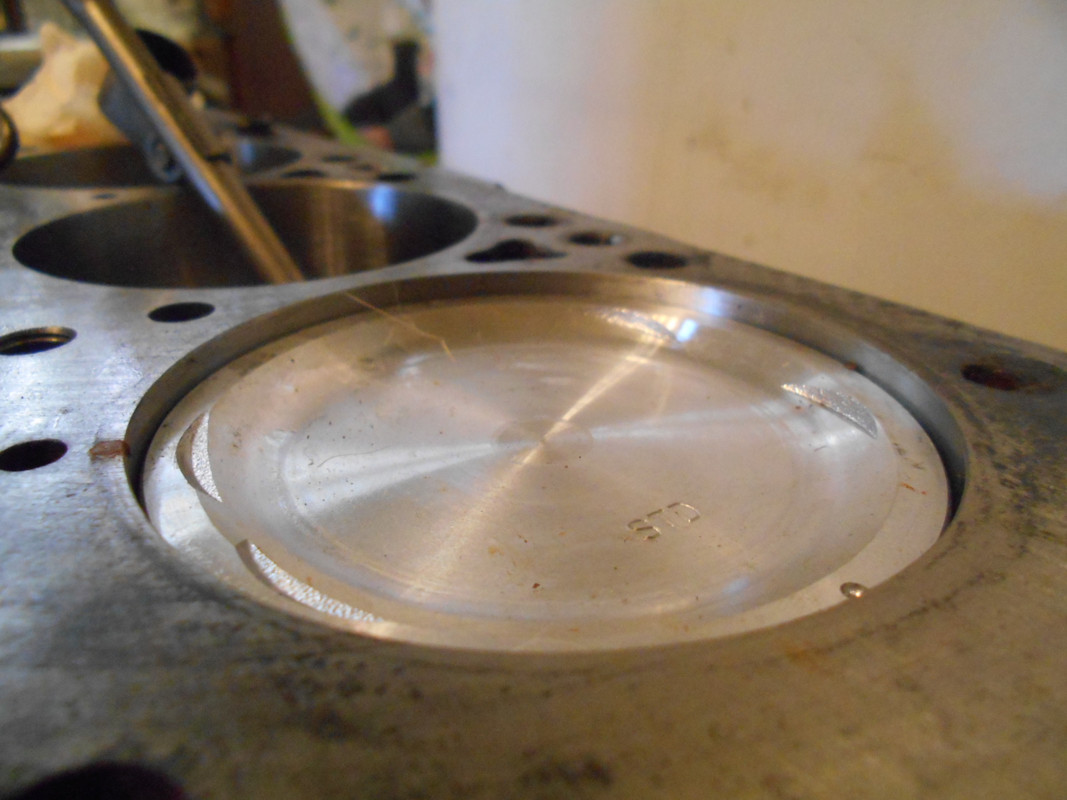 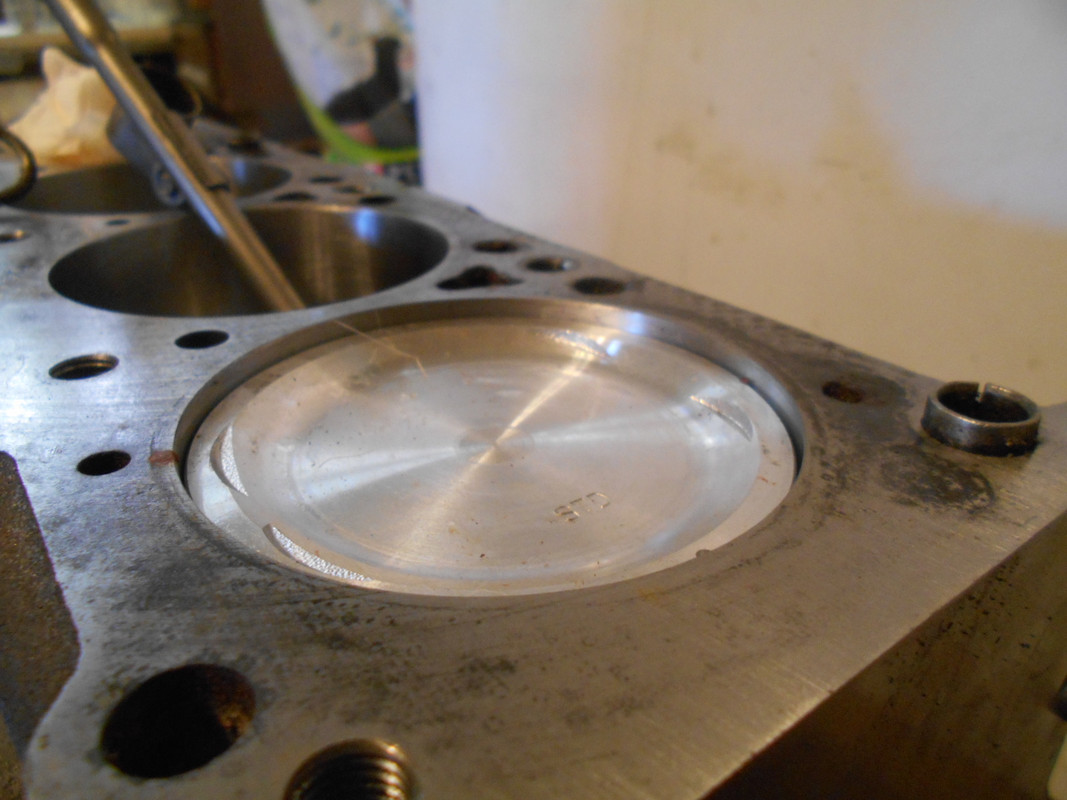 So I figured this out, all is good!!!
Last edited by wayno on Fri Aug 26, 2016 5:39 pm, edited 2 times in total.
“The difference between genius and stupidly is that genius has its limits” Albert Einstein
Top

Better strap a turbo to that to make up the deficit.

Sorry, I have no actual useful answer to your question.
When the only tool you have is a hammer every problem starts to look like a hippy.
Top

DRIVEN wrote:Better strap a turbo to that to make up the deficit.


Sorry, I have no actual useful answer to your question.

Turbos are a pain.
I am thinking that I am going to have to source a set of the longer rods unless my CR is 8.9 this way with the closed chamber head.
This was not the plan, I don't recall the last engine being like this, seemed like the pistons were level with the deck.
“The difference between genius and stupidly is that genius has its limits” Albert Einstein
Top

So something odd happened. And now that its assembled you cant measure it.

Somehow you mixed and matched.
Top

Laecaon wrote:So something odd happened. And now that its assembled you cant measure it.

Somehow you mixed and matched.

I did the same thing I did on the last one I built, but this one is a Z22S block, when the first one I built was with a Z22E block, they both have Z24 pistons in them.
It has to be the rods, the first block must have had the longer rods, this block didn't.
I need someone to tell me what the CR is on this with a closed chamber head, I don't know how to figure it out.

I have a Z20 in the shed with the long rods, I wonder if them rods will work?
“The difference between genius and stupidly is that genius has its limits” Albert Einstein
Top

That site will not let me put in what I have done to the block, it's been bored out to use 89mm standard Z24 pistons, it keeps changing my info back to the Z22 block/piston specifications, a warning keeps popping up saying that the block is not compatible with that piston even though I type in what I have installed in the block.
“The difference between genius and stupidly is that genius has its limits” Albert Einstein
Top

Could always buy a burette and do it the old fashioned way.
When the only tool you have is a hammer every problem starts to look like a hippy.
Top

You aren't using it correctly. Make the block bore 89, don't use the overbore. Hg height of 1.2 use the v91 head.
Top

Laecaon wrote:You aren't using it correctly. Make the block bore 89, don't use the overbore. Hg height of 1.2 use the v91 head.

I tried it a lot of different ways, in the end it would not except a Z24 piston in a Z22 block.
“The difference between genius and stupidly is that genius has its limits” Albert Einstein
Top

I have no idea how this happened as I usually double check everything, I thought that I had the crank in the proper position but I guess I didn't, I actually pulled one of the pistons/rods to get the casting number off of it, I looked down at the other piston a little later and it looked correct, this baffled me, I looked at the crank again, it looked correct like when I looked at it earlier, but it must not have been correct because now it looks like it should. 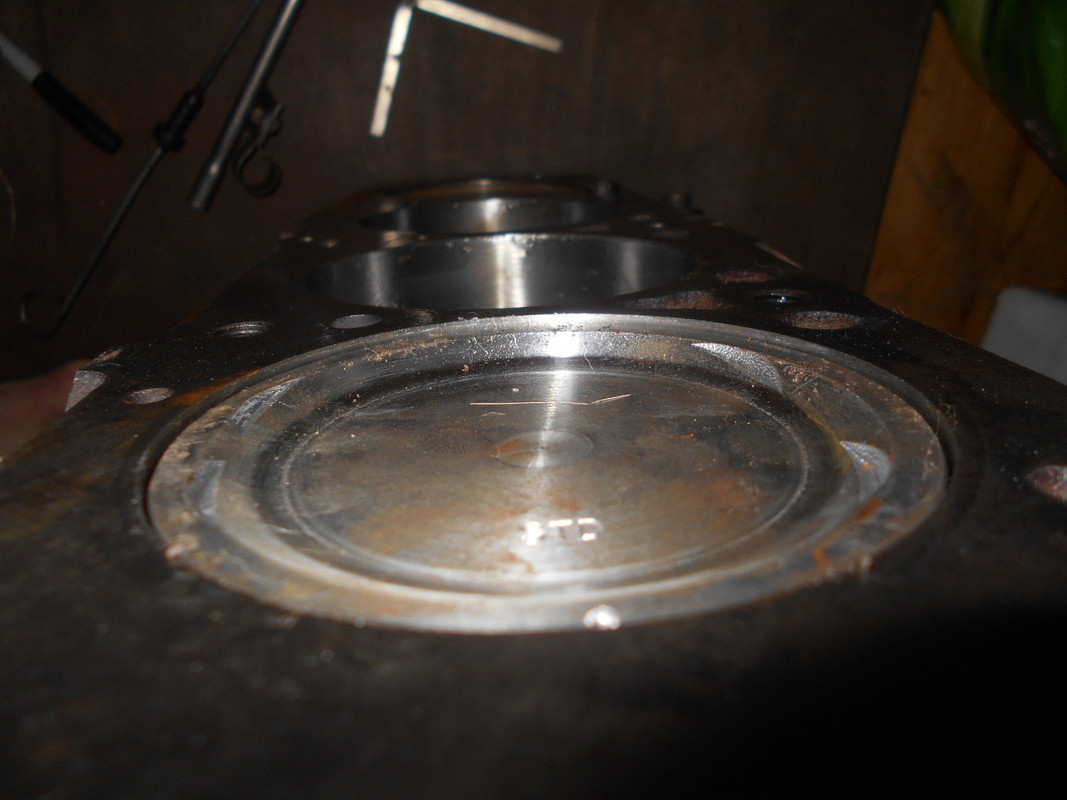 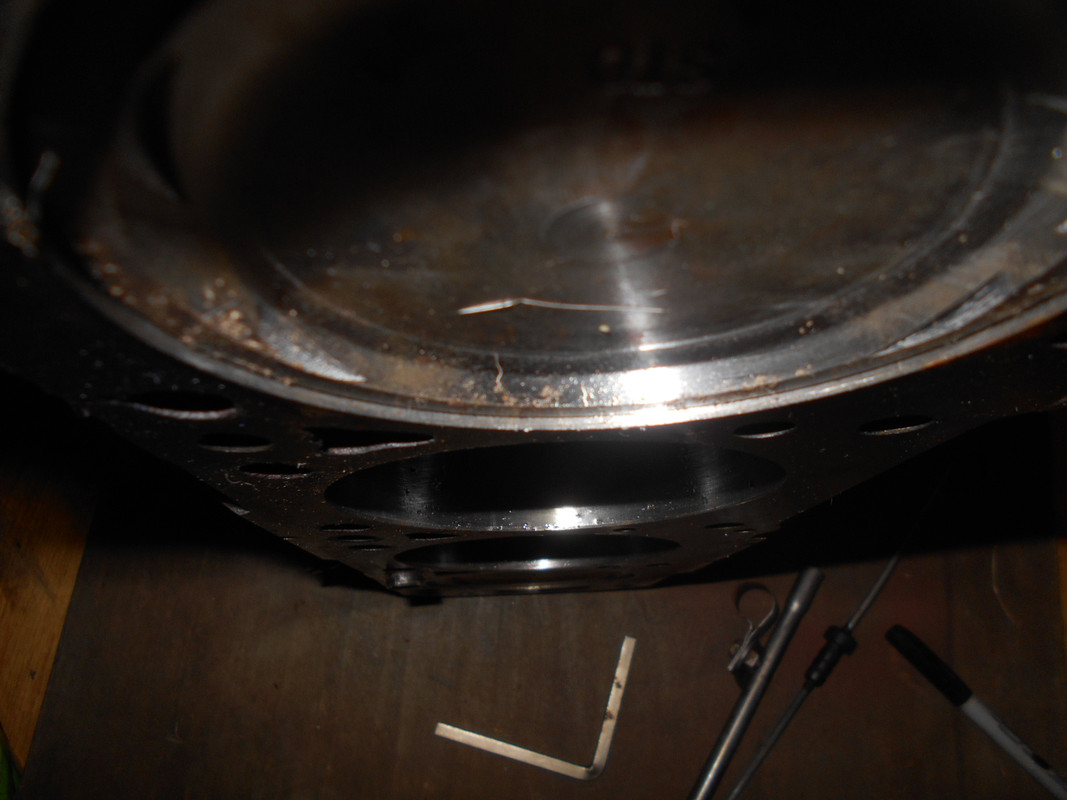 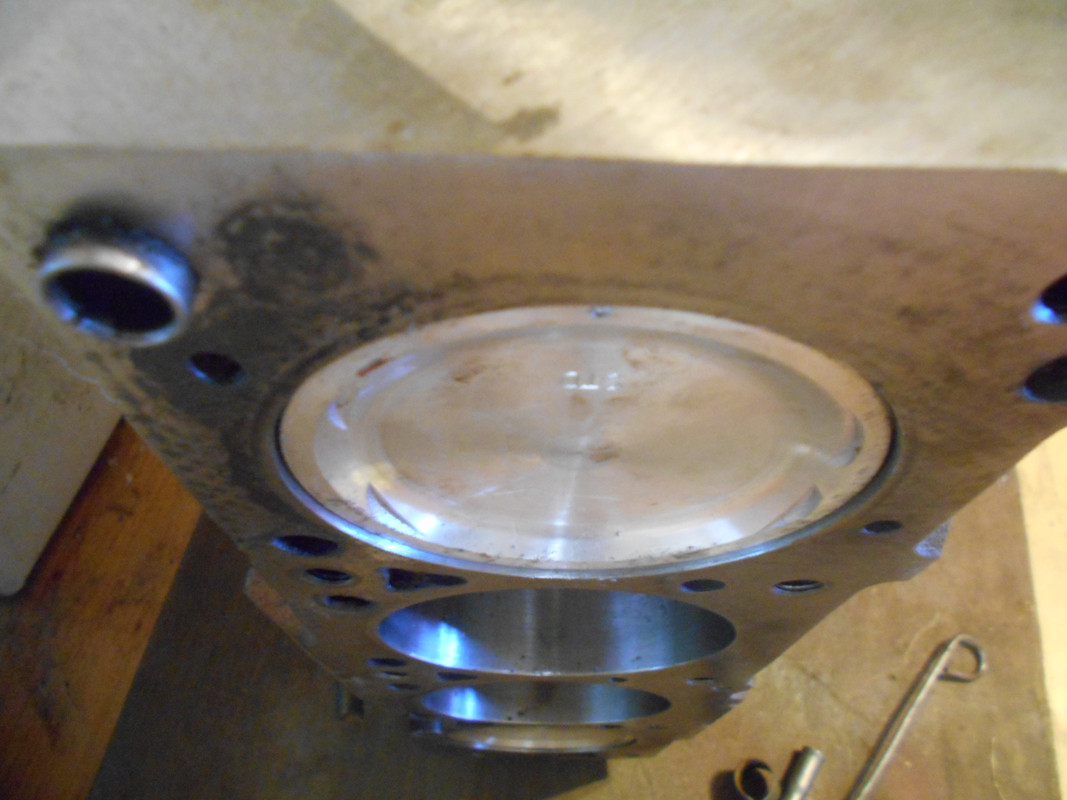 I screwed this up somehow, not a mistake I make very often, especially when the piston was so far down in the cylinder, that was the first thing I looked at, well this block is ready to go.
“The difference between genius and stupidly is that genius has its limits” Albert Einstein
Top

It worked first try for me... 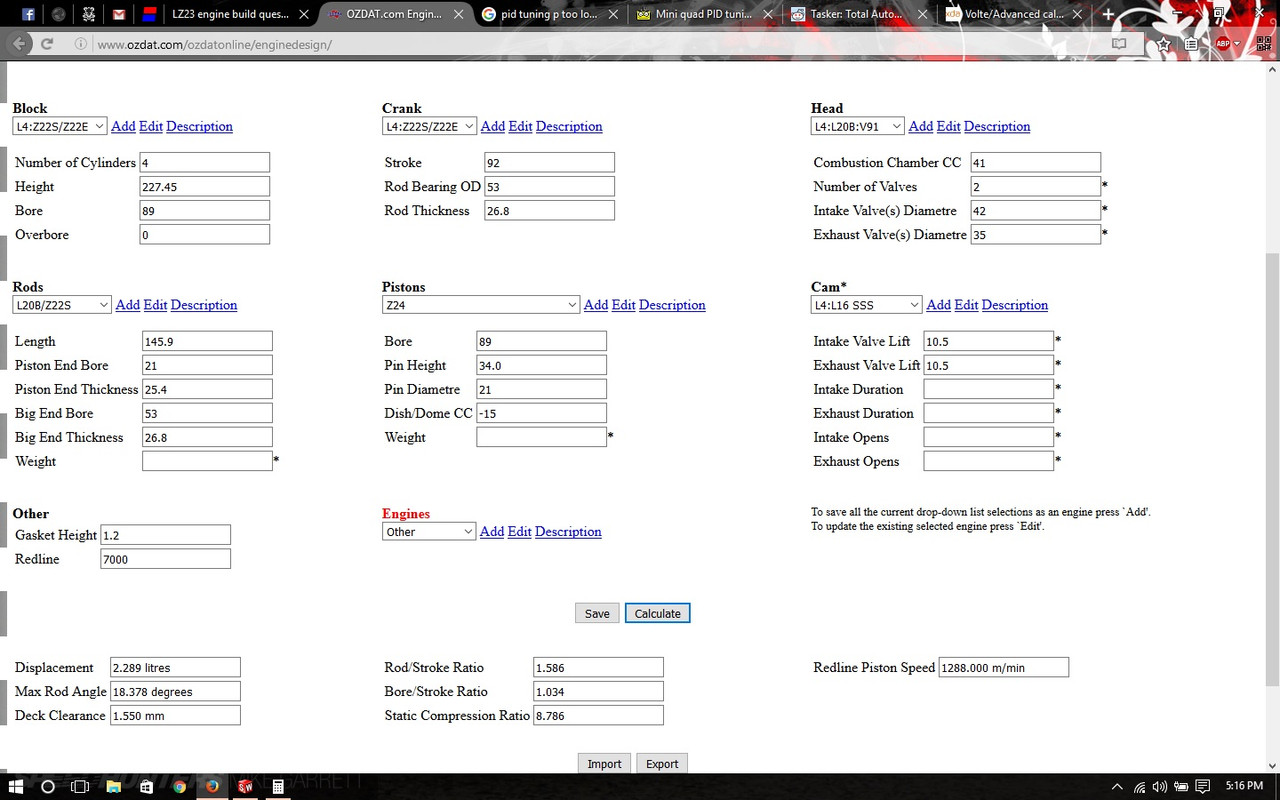 OK Jacob, I didn't put the bore down as 89mm in the block box, it was at 87 like it came stock, when I changed that like you did it gave it to me.
It kept saying the piston was not compatible because of that one number, I just kept putting what the block was, I didn't change the bore size, I learned something today, thankyou.

I copied everything you did and couldn't get it to work, then I started checking every number against yours, that is when I figured out what I was doing wrong, that is a great resource, thankyou for posting the link to it!!!

Now I need to buy a head stud kit, should have bought that weeks ago.

ARP head stud kit due to arrive next Friday, all is good.

I am going to talk about the engine build here from now on.
I have the timing chain kit and the full gasket set, I am picking up a Z24 head gasket later today.
I drilled the water coolant passages in the block this afternoon, and I painted the block the same color it was, didn't use special paint, so it likely will peel off or flake, but it will be dirty by then. 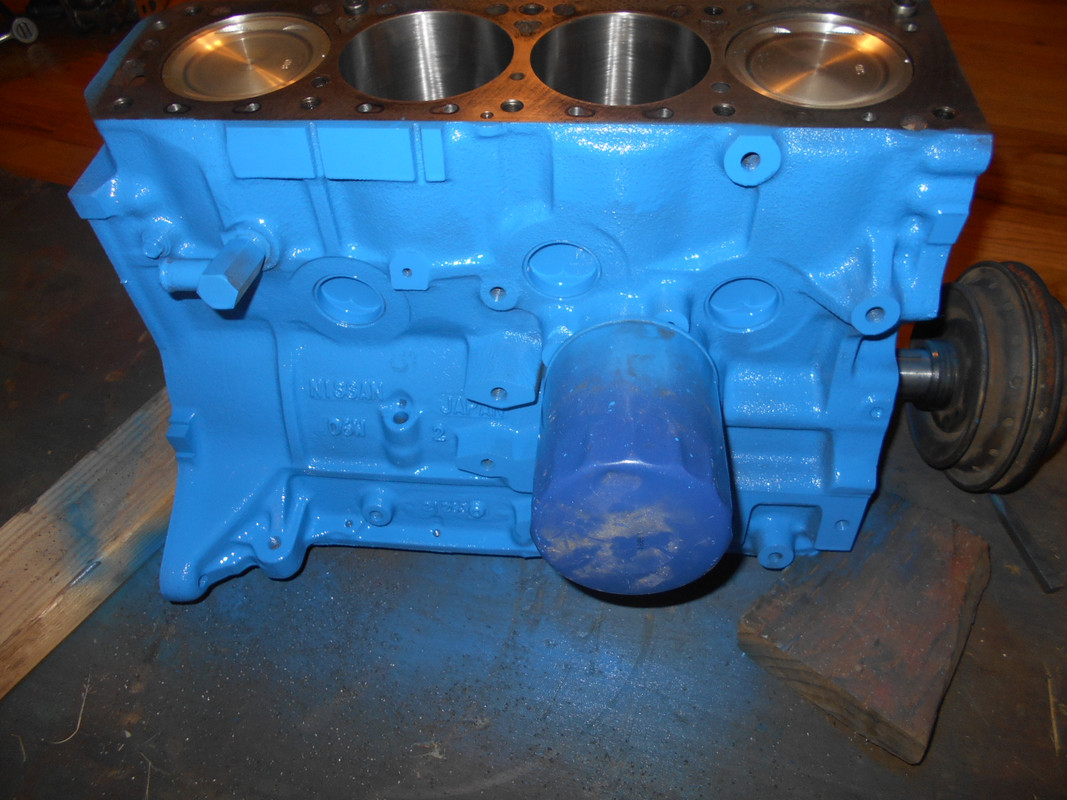 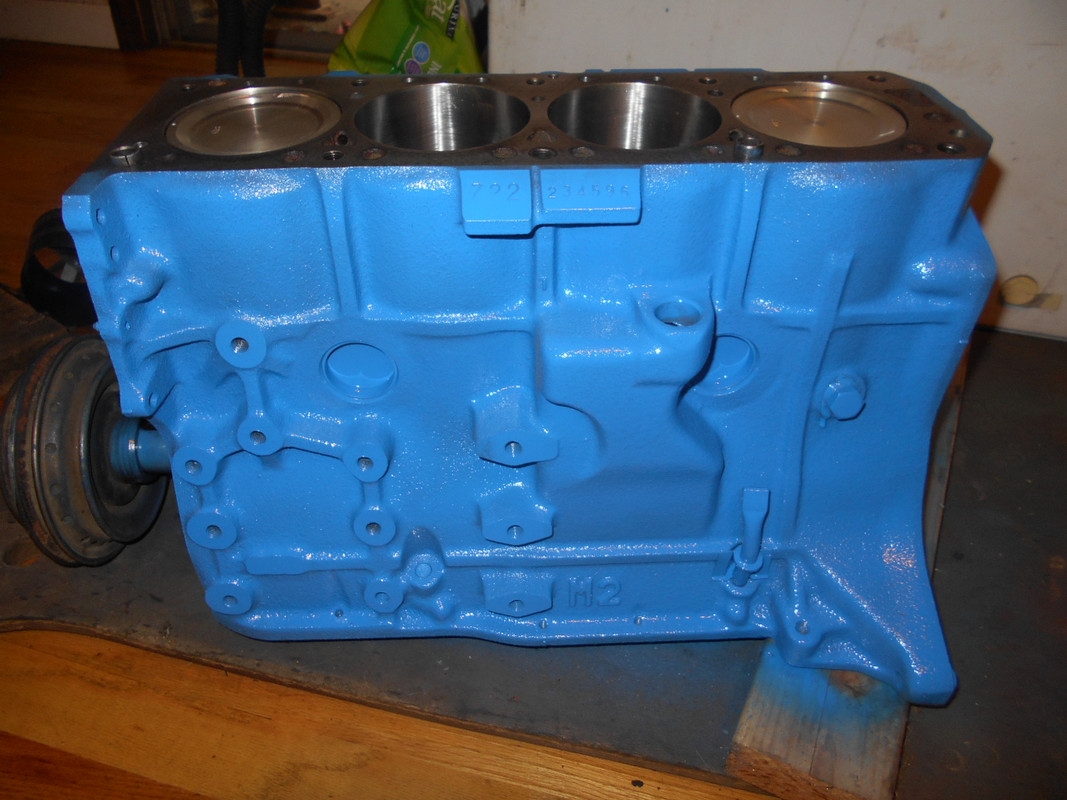 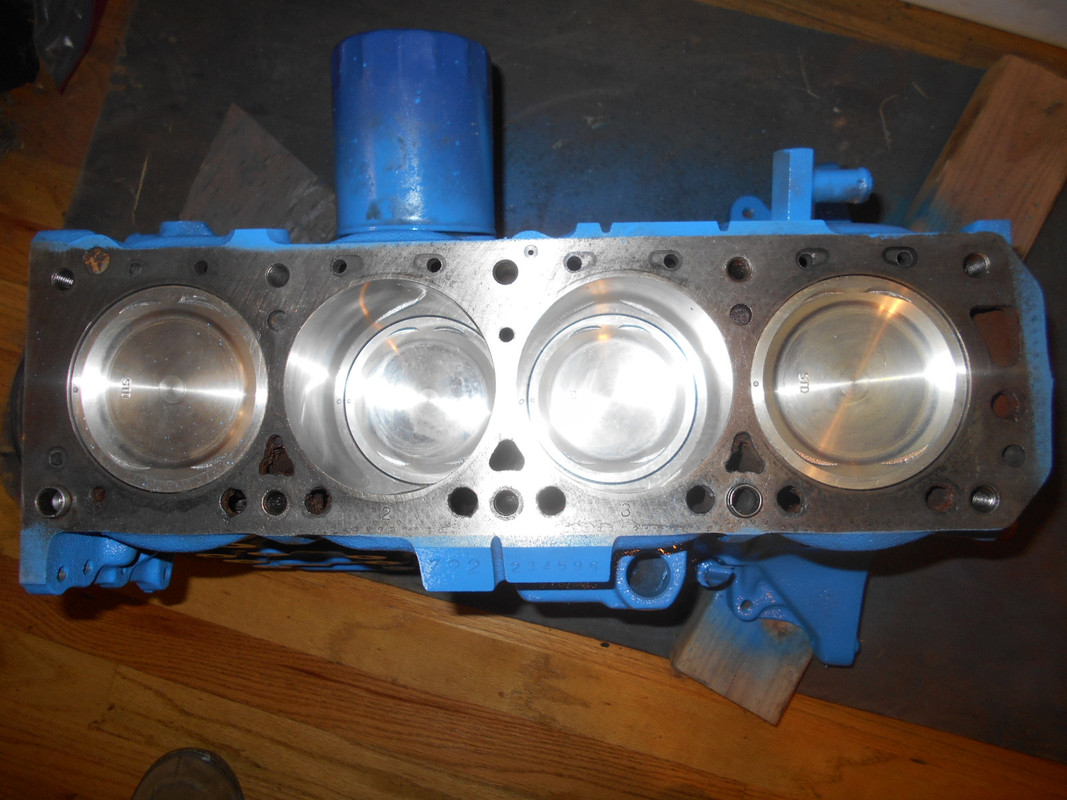 I will put the head on first, then the timing chain kit and timing chain cover, then the oil pan/pick up tube, last will be the distributor and oil pump.
Need to buy an oil pump, I have forgotten what the best one is, for the hardbody I believe, it's high volume as I recall.
“The difference between genius and stupidly is that genius has its limits” Albert Einstein
Top

I forgot, I deleted the Z24 oil dipstick on the driverside, I cut it, flattened it, folded it over and flattened it again, I am hoping it doesn't leak. 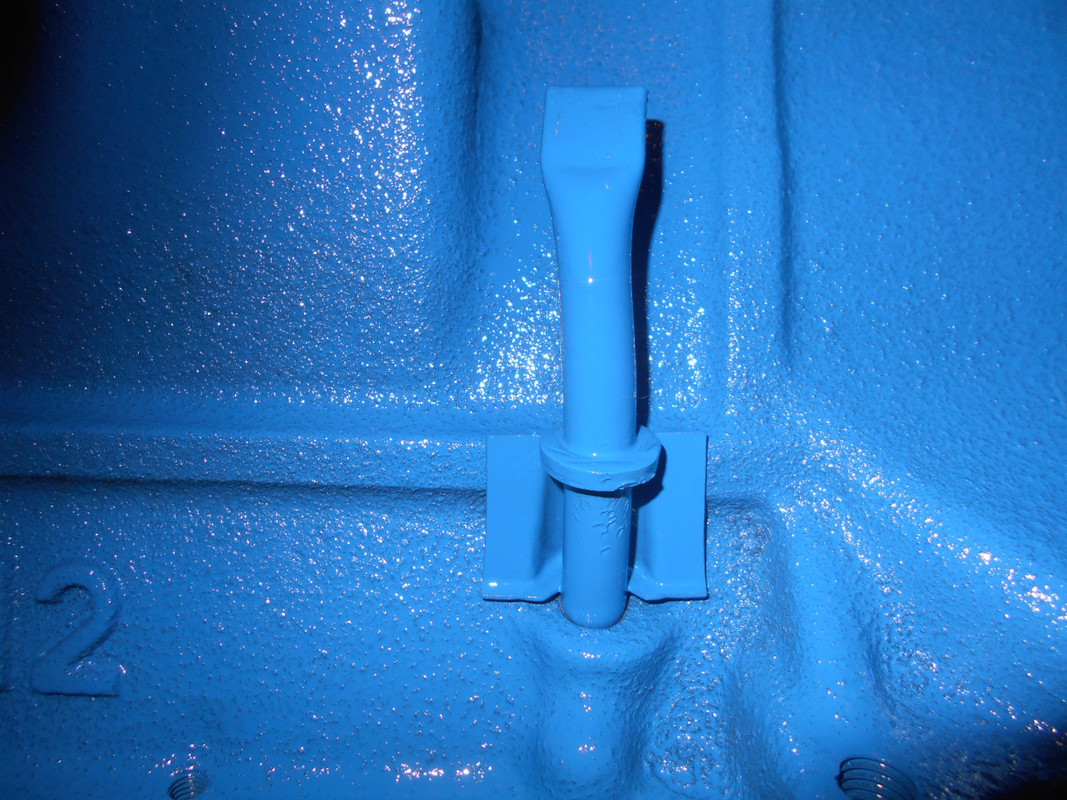 I am curious why the head is not drilled in the 4 places that have circles, the gaskets have holes there. 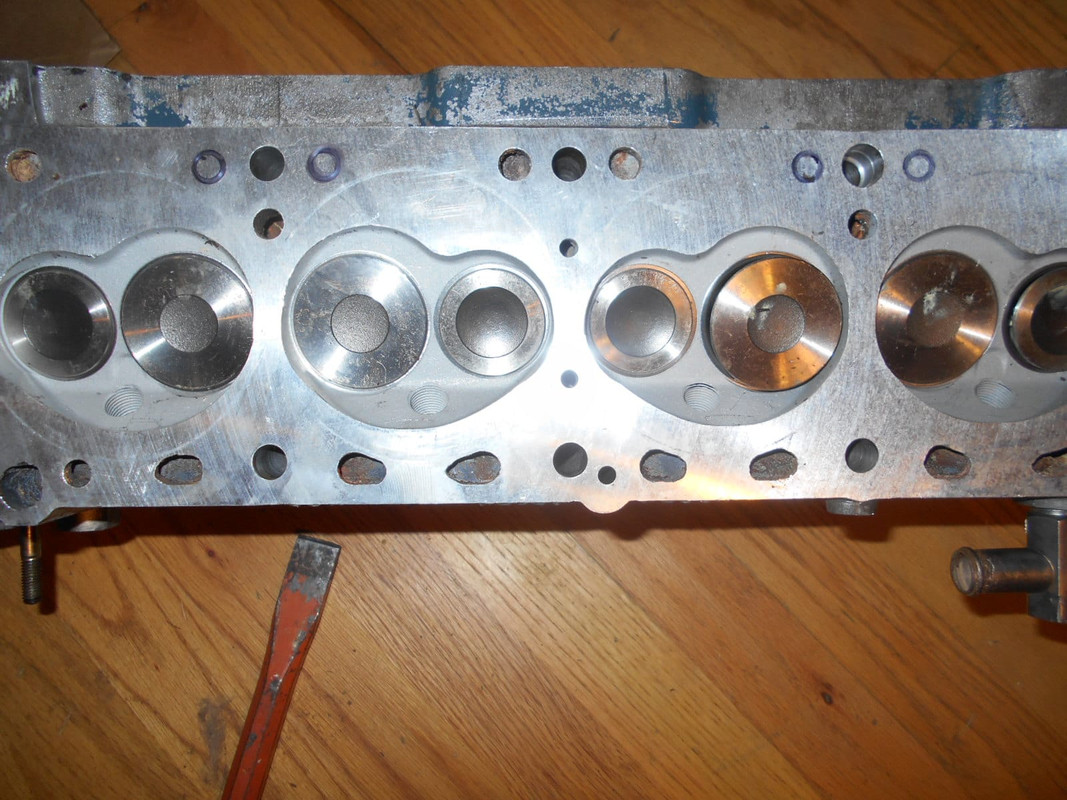 Your gasket is for a Z motor, not L head.
Top

flatcat19 wrote:Your gasket is for a Z motor, not L head.

I made them marks using the L block head gasket.
I went and looked at the other 2 heads I have(W53 and 219) and neither of them have them holes drilled either, I am wondering if the U67 head has them holes drilled, because that head doesn't have the holes for the intake manifold as it has the intake bolted to the exhaust manifold, I don't have a U67 here to look at.
“The difference between genius and stupidly is that genius has its limits” Albert Einstein
Top
Post Reply
38 posts