Any of you nw guys have a 720 4x4 rear end. Mines getting bad. No howling noises but serious play and clanks when shiftin dem gears. I want the whole axle. Idk how to swap gears or if that would fix it.

As always. Cheaper the better. Sooner than later.

Here you go... http://portland.craigslist.org/clk/cto/4585250691.html
When the only tool you have is a hammer every problem starts to look like a hippy.
Top

It really depends on the year and what it actually wrong with your rearend, the first 3 or 4 years used the H190 rearend, that one is easy to change out the gears, but if it is an 80 4X4 720 you have, you could possibly have them 459 gears, good luck finding them.
The later 720s had the C200 rearend, not easy to change out them gears unless you know how.
Do you know your gearing izzo?
“The difference between genius and stupidly is that genius has its limits” Albert Einstein
Top


I don't. I looked at the tag and I thought it said 41 but i will have to double check. 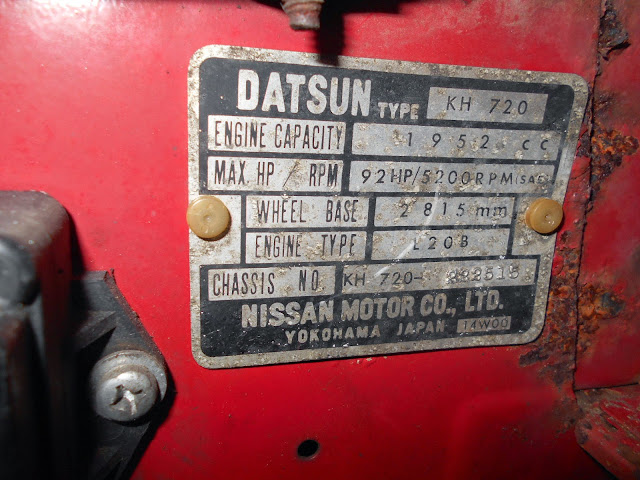 !981 models on had the ratio on the tag in the bottom right corner, 4.1 was a common ratio, unfortunately my 4.1 is sloppy, and I could not in good conscience give/sell it to anyone, I thought my rearend was going bad recently, turned out to be a bad "U" joint.
“The difference between genius and stupidly is that genius has its limits” Albert Einstein
Top

I thought it was a U joint also. I got under there and the only play was when i spun the rear drive shaft. it was floppy at the pumpkin :\ I can hear it clank when I'm driving. Can also hear it over bumps clanking around. I'll take a video at some point and show you.

izzo » Sat Jul 26, 2014 4:42 pm wrote:I thought it was a U joint also. I got under there and the only play was when i spun the rear drive shaft. it was floppy at the pumpkin :\ I can hear it clank when I'm driving. Can also hear it over bumps clanking around. I'll take a video at some point and show you.

That's the spot where I checked. I will take a pic and post it sometime, maybe tonight. At work at the moment.


I could not tell my U-joint was bad till I removed the driveline, then it was easy to tell, that was the clang I would get when I stepped on the gas or let off the gas, I also thought it was the rearend, I even pulled the fill plug to check to see if it had any fluid, it did have fluid, and it was the correct color also, that was when I went back to the driveline and pulled it, the rear u-joint was bad, but it looked good in position.
Pull the upper fill plug in your rearend, stick your finger in the fluid inside and check the level and color, if you have no fluid, it's likely bad, if the fluid color is silver or brown, it's likely bad, if it is amber/clear yellow, then the rearend is not likely the issue, it doesn't take that long to check, if it is black, then you will need to drain it to check the magnet, if it has chunks of metal stuck to it, well you know what the issue likely is.
“The difference between genius and stupidly is that genius has its limits” Albert Einstein
Top

It can "clang" when the rearend is bad also, remember that C200 dually rearend issue I was having, the first time I lost one of them the driveline was like a tuned instrument, it was loud, and it turned out to be the carrier housing inside the rearend that had ovaled holes. 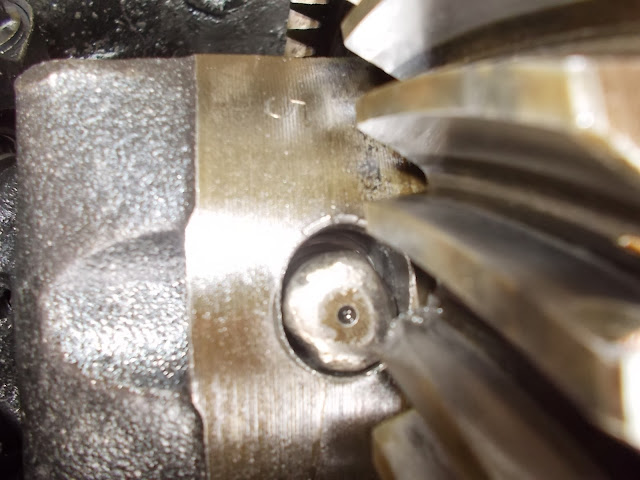 The driveline had a hell of a tune going on, not sure why for sure, but I think it was because it was solid(good u-joints) and very long(2 feet longer), so the next time another one(rearend) started making the same noise I figured it was the same thing, it wasn't as loud yet, but it kinda sounded the same, well that one turned out to be a u-joint that time, the funny thing is that I just assumed it was the same issue, and instead of pulling the rear cover and inspecting it, I just repaired the first rearend and changed out the whole rearend, and then it made the very same noise once it was in, I had not inspected the driveline I had just bolted it back up, I pulled the cover off the one I had just removed and seen it had no issues, so that was when I pulled the whole driveline and found the problem, I am very good at wasting my own time, and other peoples time to if you took the time to read this.

You are correct though about how stuff usually sounds on H190 rearends, when they go bad, they usually howl or make a clunk sound, I have went through about 3 of them(all H190s), all of them howled, but one clunked also.
“The difference between genius and stupidly is that genius has its limits” Albert Einstein
Top

Yeah, mine doesn't really make a noise. but it does vibrate on decell or when i left off the gas.. It's probably the same thing. no video yet been to busy.

I am positive its the rear end/axle already. I checked all the u joints. I left it in gear and shook/turned everything. the member has play in it. Shameless self bump, too. I fear its getting worse.
8========D ~~~ ( o Y o )

For what value this may present itself as.
I've had 2 rigs that had dis-integrated u-joints that showed no play what so-ever.
They were dry as a bone , and ground to dust on one cup at least that I remember.
I decided to pull out the driveline , and press them out since I knew the rear differential as a whole was good on one of them (serviced/repaired/re-sealed).
I believe I replaced with greaseable u-joints , and pretended everything would be ok after that *sucking thumb*
Sure enough a-ok after.

Thought it would be worth mentioning , but alas I really don't know.
I'm not a pro or even close

Hope you get it figured out Tim !

Free bump as well for ya

To check U-joints, you need to take the driveline out of the truck, it has to be almost falling out to see it when it is in the truck, my work truck started vibrating a month or so ago, I thought it was the rearend also as it was clanging, but it was the U-joint, and I could not tell till I dropped the driveline, I was lucky, it was the rear one, so I didn't have to remove the whole thing, it's a 521.
I have had a few rearends go out, all the H190s howled, even though they had lots of play in the pinion flange, they did not clunk/clang, they just howled, now the C200 rearend is a different story, I have had them do all sorts of shit, that doesn't mean it is not your rearend that is going bad though.
When I buy a rearend from the wrecking yards, I look for ones that have less than a sixteenth inch play, I will take up to an eighth inch play, anything more and I pass on it.
Did you ever look at the color of the gear oil by removing the fill plug and sticking your finger in the hole and into the fluid?
“The difference between genius and stupidly is that genius has its limits” Albert Einstein
Top

My goons ujoints went out. Though you couldnt tell in car, or out of car. But every start in first gear and then into 2nd was a clang. But yea no slop even out of the car...
Top

I'll check the fluid. I didn't take a video. I'll get dressed here soon and go take that video.

So, it looks like there is a little play in the video, but I assure you there is none in the U joints. It's just the angle. I can grab the yoke and hold it, spin jerk twist the driveline (giggity) and notta... I also used a pry bar and tried to see if that would make any movement. Notta!


The truck is in neutral. I have a wheel chalk on a wheel and the E-Brake on. That's the play... That's the clank... There is a super super tiny bit of play between the back half and the front half. So small I can't measure it with tools I have, very very small.

Video is processing, but here is the link.. Should be done soon.

C200 have back covers right? Remove the cover, look from crap. See none. Replace Ujoints. Like I said, just because there is no play doesnt mean its not ujoints.
Top

did you see the video? you can see the yokes moving and clanking...

I don't see a link.
When the only tool you have is a hammer every problem starts to look like a hippy.
Top
Post Reply
38 posts